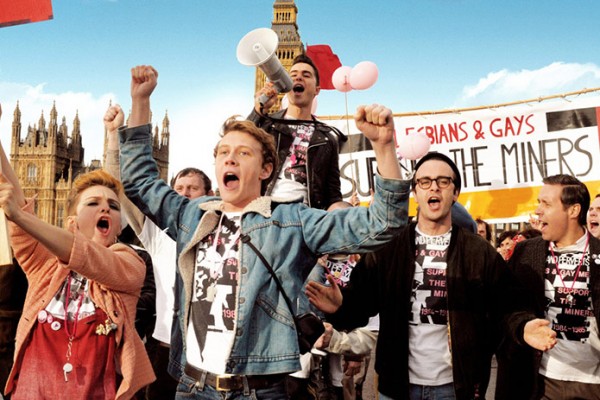 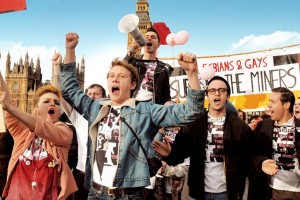 There is a veritable autumn forest full of movies being given wide release this weekend, and something for everyone, although most of them are not particularly good.  Among them are The Judge, starring Robert Downey Jr., Dracula Untold, starring Luke Evans from The Hobbit,  and Alexander and the Terrible, Horrible, No Good, Very Bad Day, starring Steve Carell and Jennifer Garner.  However, there is an indie reaching our shores this weekend to which i’d much rather call your attention.

Given all the same sex legislation in the news all over the country right now, I have chosen to review a wonderful little English film likely to become a sleeper hit in the US directed by Matthew Warchus named Pride.   It tells the story of real events and people, penned with delicacy and humor by screenwriter Stephen Beresford, who did copious research and met with those involved to get all aspects correct and authentic.  With over 70 speaking parts, and an amazing ensemble cast, it sweeps the audience up into an experience that shows life can be funny even at its darkest, and is at once inspirational and poignant.

In the summer of 1984 there was a famously lengthy and divisive strike of the National Union of Mineworkers in the UK.  Most people there remember that.  What was less publicized was a that gay activists showed solidarity and support by creating a group called Lesbians and Gay Support for the Miners and raised a substantial and consistent amount of money to help a small mining village in Wales.  It may seem like a little bump in history, but it was two very different groups coming together through the small heroic acts of members of the gay community who saw similarities in their adversity and oppression, and changed history and the perception for both the miners and civil rights for gay people at the time.   Writer Beresford took his role in bringing this little known aspect of the strike to film so seriously that when one of the real life activists saw the finished film he said “it’s just exactly as I remember it.”

The very best part of Pride, apart from it committing this heroism to celluloid, is the amazing cast called upon to do so.   Both seasoned, famous actors and newcomers fresh from drama school come together, in the spirit of what feels like true camaraderie.   They are given, through the script, very complicated, detailed characters to portray, sometimes with a limited number of lines.  Even as the movie dips from time to time into the sentimental, the depth and authenticity of each role, played and written with such heart, raises the movie as a whole and froths the audience into a to a sort of ecstatic joy when good or hopeful things happen in the story.

In Pride, there are more talented performers than there is time to mention in one review.  Imalda Staunton (Hefina) and Bill Nighy (Cliff) head the cast in terms of an acting hierarchy.  Fans of Nighy know he can do more with the tweak of an eyebrow than most can do with an entire body.  They bring their talents to bear, but so too do Dominic West (Jonathan), Andrew Scott (a particular stand out as Gethin), and Paddy Considine (Dai), as well as relative newcomers George MacKay (Joe) and Ben Schnetzer (Mark).  This is a true ensemble, no doubt benefitting by the stage experience of its cast, who during interviews repeatedly praised the experience of working together and on the film as a whole.   Just watching the actors talk about being in the film, and their enthusiasm and love of the subject, as well as their dedication to get it right, to honor the story and the people they portray, was inspiring.  Imalda Staunton and Bill Nighy both have such economy of movement, such grace in their interviews, it is no wonder they are always so magnetic to watch in film.

Said Nighy of the story and film, “it was complete news to me.  I was amazed and touched and moved by it.  It’s one of the best scripts i’ve read in my life, certainly in years and years…the writer has protected the legacy of that part of the story of the miners strike, and that part of the story of gay emancipation in England.  This has been one of the best jobs i’ve ever had.”  Staunton said she felt a great responsibility to give dignity to representing Hefina, who passed away at the very beginning of filming, and that director Warchus was the sort of quiet genius who wanted the movie to grow organically, but gave rare yet succinct notes that always added to the scene at hand.

I’ve been in on enough press interviews to know when a cast is speaking out of necessity and when they feel a genuine love for the project.  This is unquestionably the latter, and it shows in every frame of the finished film.

Production designer Simon Bowles wisely stays away from the most bold and brash of the mid 1980s.  The set decoration and costuming attempt to hone in on the specificity of the time and place without cliche, which for a film based in that period was a very good choice.  The visuals never get in their own way, and allow the characters and story to build on their own merit.

If the story of these activists coming together, of shared humanity and compassion appeals to you as a filmgoer, by all means seek Pride out.  It is not only a life affirming delight, and a powerhouse example of an ensemble performance, it is a poignant example of people choosing to make a difference that will leave you inspired and moved in a way that will stay with you long after you leave the theater.

see more about the film here: