The Theory of Everything: Leads Deserve to be Lauded 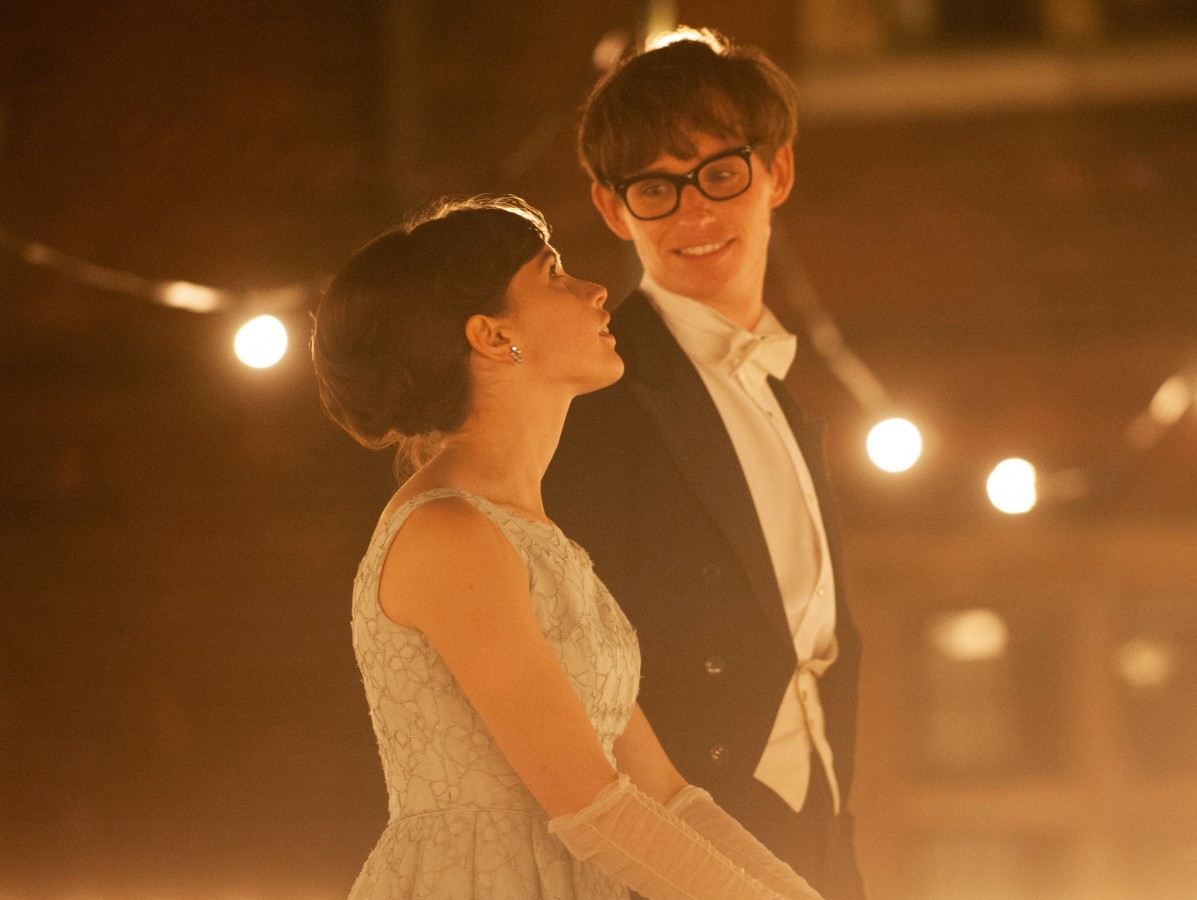 The Theory of Everything: Leads Deserve to be Lauded

The biopic is a very unforgiving genre in the world of movies. Pitfalls inherent to them are the predictably seen timeline from youth to success or nearly insurmountable challenge in the usual chronological order, the whitewashing of edgier aspects of the subject as if the film was created with permission, and an ending that celebrates a moment of personal triumph.

In The Theory of Everything, there’s a bit of all of the above, but in it, the lead actors all but take the audience by the hand to accompany them on the journey. They perform so spectacularly, and the film is so prettily shot, the audience will find themselves willing to go along, staying engaged and interested.

Eddie Redmayne as Stephen Hawking, contorting himself and morphing his perfectly healthy body to represent the famed theoretical physicist’s slow deterioration from ALS, even as he makes monumental scientific discoveries, is the absolute definition of Oscar bait. Even separately, each aspect of the film and role is tailor-made…a portrayal in a biopic of a hugely influential figure, embodying that person with a minimum of makeup, and expressing the struggles of a debilitating illness…but Redmayne BECAME Hawking. The Theory of Everything would not have succeeded to this degree in lesser talented hands.

Directed by James Marsh (Project Nim, Man on Wire) and based on Jane Hawking’s memoir “Travelling to Infinity: My Life With Stephen Hawking,” this is about one of the most fascinating brainiacs of our time, but it is centered on his younger life, starting at Cambridge as a young man, where he meets his future wife and fellow student Jane Wilde (Felicity Jones). They fall in love in romantic 1960s fashion, with surreptitious glances, conversations over tea, and dances with bow ties and bouncy hair. Even as they find themselves deeply smitten, Stephen is showing signs of trouble, with hard-to-hold pencils, easily tripped-up short jaunts across campus, and unexplained tics. Then the worst news comes. He has ALS, (of the recent bucket challenge) a disease that, he is told, will result in his death within two years. There’s nothing, says the doctor, that he can do.

This is not the end, as you may know by the fact that Stephen Hawking is still with us, many decades later. What unfolds over the course of the rest of the film is a testament to the beauty of and difficulties inherent in commitment, selfless love, and determination when faced with really bad odds. It is also a somewhat softened version of events, as well as of character. Marital complications are smoothed over that might raise eyebrows if examined more closely. ALS, a diabolical disease, the handling of which permeates all they do, is of course not the only challenge they had to face. Life is always more complicated than that, especially when it is the life of a scientist changing the way people think about the universe and the meaning of time.

The Theory of Everything could have been an unjaundiced look at all the facets of their life together, which would have likely meant an audience continually switching sympathies and sitting in judgement of one or the other of the couple. That would have been an interesting movie, but not one in which the themes of wasted potential, the power of an ironclad will, and the meaning of unconditional love could have been examined so deeply, nor to such rich reward. Marsh uses a visual palette of soft colors and diffused light, as well as the natural beauty of Cambridge and the English countryside as a backdrop for the story, making moments of emotional weight serve the larger themes rather than leading us to overly consider Hawking the man. His experience as both a leading thinker of our time and a victim of a crippling illness are beyond us. Marsh’s decision to direct our attention elsewhere to these larger themes allows us to understand him as we could plights of our own.

No one wants to die without achieving what they are on the planet to do.

When is it time to walk away and take care of ourselves, when someone who is suffering needs us?

It is the two lead actors Redmayne and Jones inhabiting imperfect people trying to press on, become more, stay committed, even as one of them is becoming at once increasingly famous and debilitated, that is captivating to watch. For all Redmayne’s gnarled pretzel-like contortions, his performance is full of subtleties. He gets more expression out of his eyebrows than most would from their entire face. Jones, too, serves up a powerhouse of acting prowess. She plays an extremely complicated woman who is trapped by societal expectations, and is trying to make sense of her faith and her own personal ambitions, while attempting unconditional love. There is no doubt they will both be making the rounds come awards season. Can’t wait to see if someone comes along that can beat Redmayne to the Oscar podium. This is a year with a wonderful comeback by Michael Keaton in Birdman and some other spectacular acting by Brendan Gleeson in Calvary, James McAvoy in Filth, and Timothy Spall in Mr. Turner. Word is that David Oyelowo as Martin Luther King will wow us in Selma, and that Bradley Cooper has turned in a riveting performance in American Sniper, both of which are biographies of a sort, so the Oscar race may become Battle of the Biopics. In any case, Redmayne as Stephen Hawking must be seen and appreciated.

The Theory of Everything is an interesting story about a genius, but it will be the performances by the Eddie Redmayne and Felicity Jones that will stay with you. With them the awards season has officially begun, and the contenders are off and in the lead.